The NorSand (Jefferies 1993, Jefferies and Been 2015) constitutive model is a critical state model applicable to soils in which particle-to-particle interactions are controlled by contact forces and slips rather than bonds, intrinsically incorporating the state parameter so that it captures the behavior of granular soils over a wide range of confining stresses and densities. NorSand requires relatively few (and familiar) soil properties that can be estimated from routine laboratory or in-situ tests (e.g., CPT data).

Verification tests were performed on one-zone tests examining a variety of conditions: dense and loose, drained and undrained, triaxial compression (TC) and simple shear (SS), the effect of additional cap softening term, and the effect of PSR. A test with multiple zones will be compared with the one-zone test. Some tests will be compared with the results from the VBA code, which deals with a point- or constitutive-level for simple conditions (TC and SS). The VBA code is originally provided by Dr. Mike Jefferies with a slight modification on the elastic calculation.

For example, the FLAC 8.1 NorSand model is used to simulate triaxial consolidated drained and undrained tests with the consolidated stress at 100 kPa. Two cases with different initial state parameters are considered where Ψ0 = 0.05 represents a loose sand and Ψ0 = -0.05 represents a dense sand. The following figures demonstrate the excellent agreement between the NorSand constitutive model in FLAC 8.1 and the VBA code. 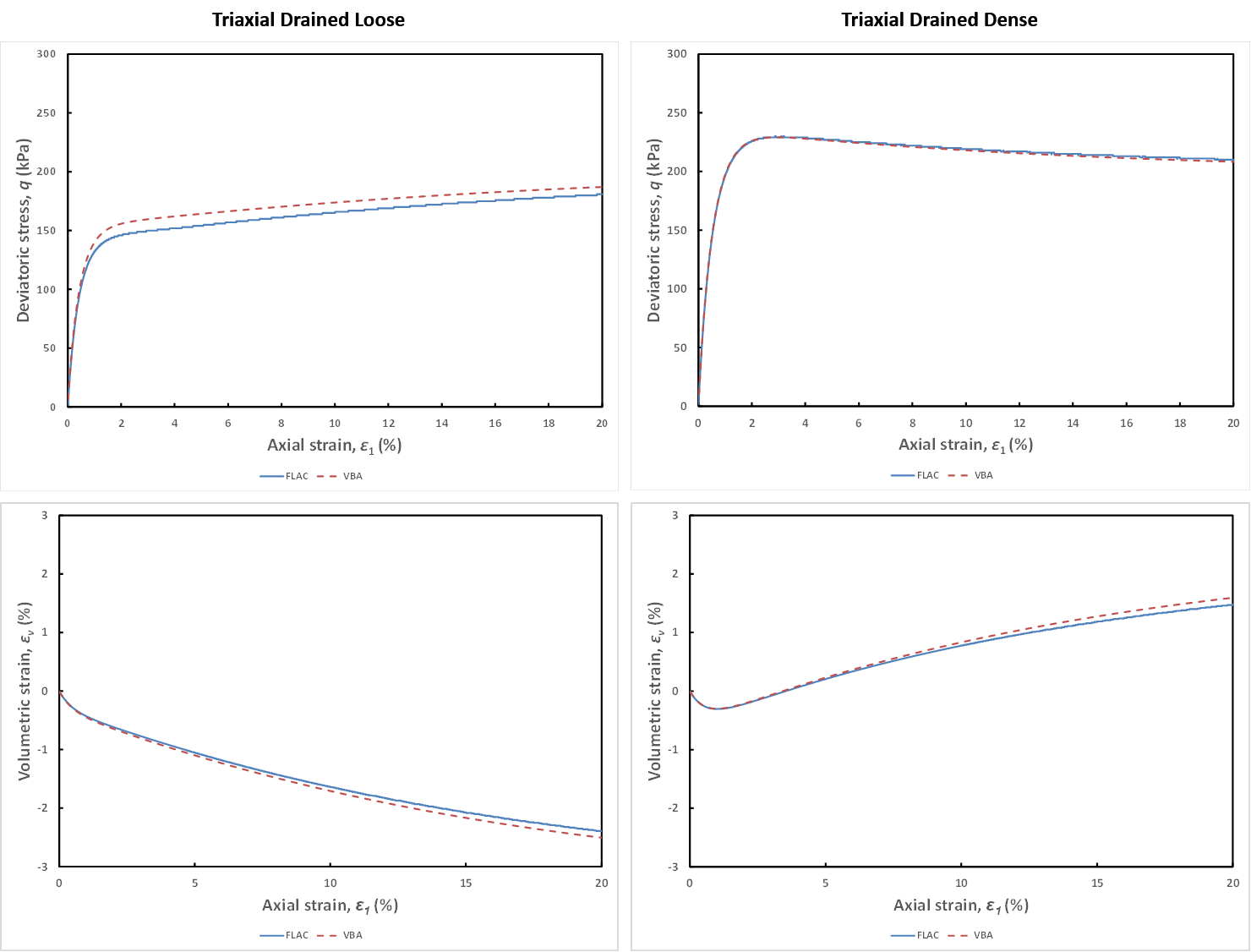 Soft soils generally refer to normally consolidated or slightly over-consolidated clays, silty-clays, clayey silts, and peats. Significant compression, is one of the main engineering characteristics of soft soils, where:

The soft-soil (SS) model has the following features: (a) pressure-dependent moduli; (b) unloading-reloading distinct from the virgin loading; (c) expansion of the volumetric yield ellipse-shaped cap; and (d) conventional Mohr-Coulomb shear failure and tension failure criteria.

The Soft-Soil (SS) model cannot simulate time-dependent behavior, such as the creep that develops during the secondary compression. The creep behavior of soft soil can be significant for some geotechnical engineering problems, e.g., embankment construction. The Soft-Soil-Creep (SSC) model (Vermeer and Neher, 1999) takes time-dependence into account so that the volumetric cap expands to a new position within a specific time (called reference time in the model) instead of instantaneously as in the SS model. Furthermore, the cap will never stop expanding — although with a continuously decreasing expansion rate. The expansion rate will be determined by the value of the current OCR. When OCR is high, creep deformation is neglectable. The SSC model has the following features: (a) secondary time-dependent compression; (b) pressure-dependent moduli; (c) unloading-reloading distinct from the virgin loading; (d) memory of the equivalent pre-consolidation pressure; and (e) degeneration to a conventional Mohr-Coulomb failure criterion when the creep time step is zero.

The option of small-strain stiffness is added to the Plastic-Hardening model to take strain-dependency of the modulus into account. Whereas the PH model assumes an elastic material behavior during unloading and reloading for very small strains, with the small-strain formulation soil stiffness behaves nonlinearly with increasing strains. Inclusion of this option is believed to improve the accuracy of the simulated deformation. The PHSS formulation is enabled by the model property flag flag_small 1.